​​​An investment in your own survival​ 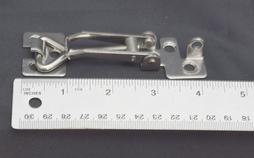 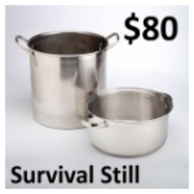 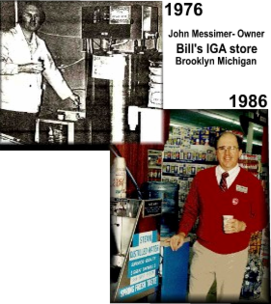 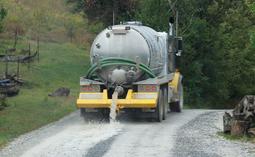 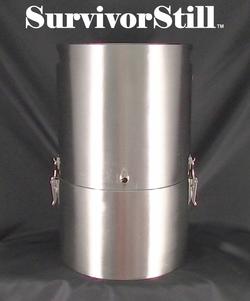 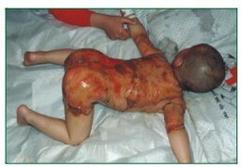 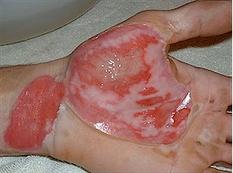 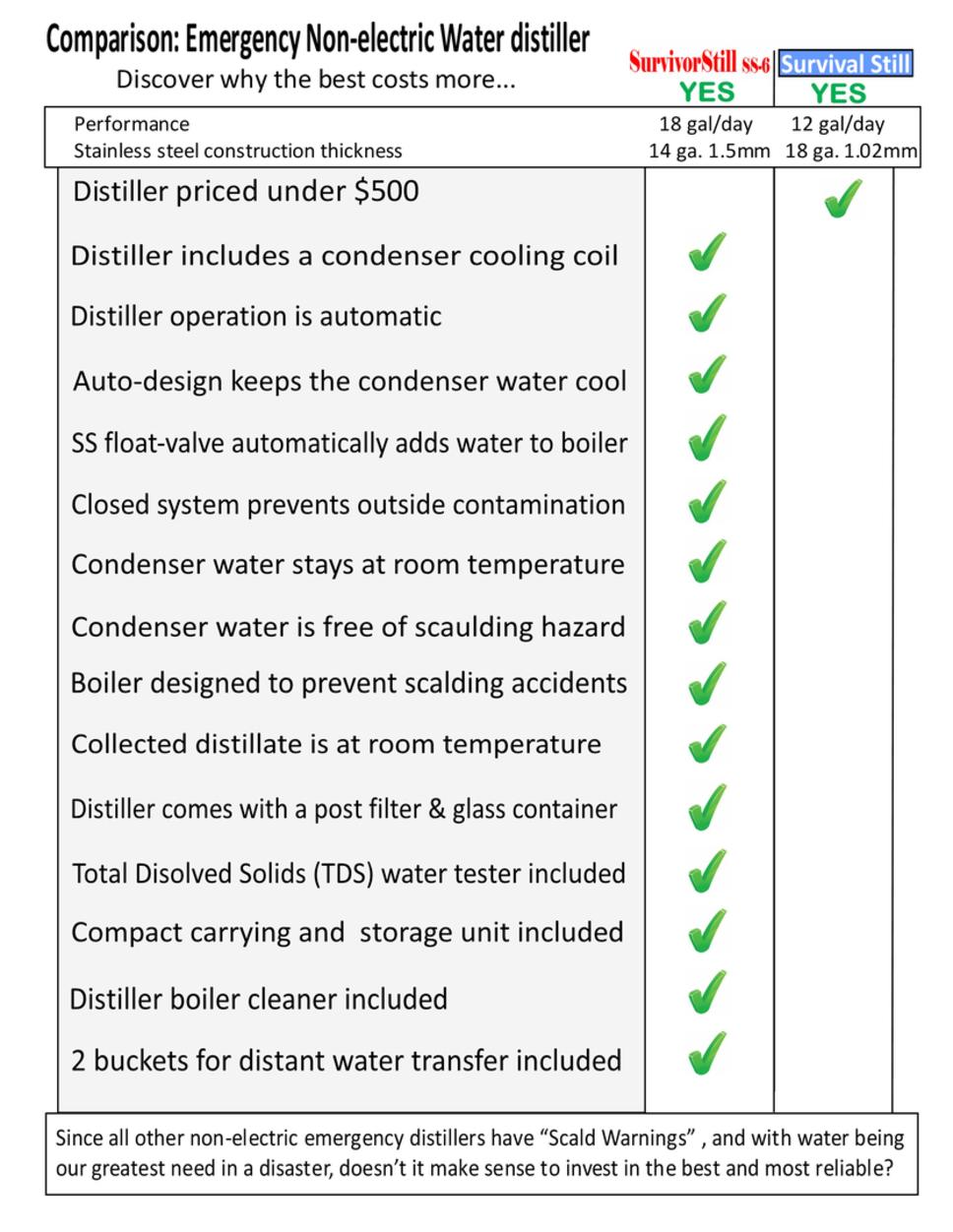 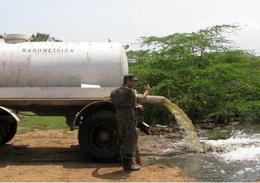 Dumping toxic waste into a river!

This is not a water distiller, it

is a steam diverter that directs

the steam from a boiling pot of

water below, to the bottom of

an upper pot of water full of 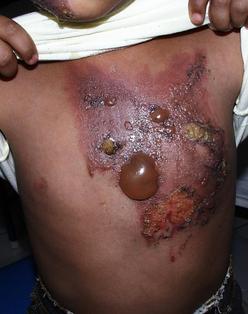 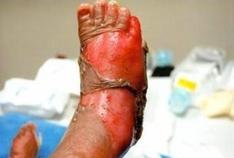 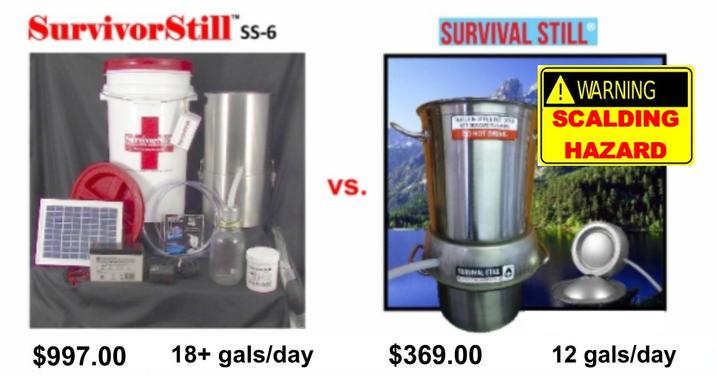 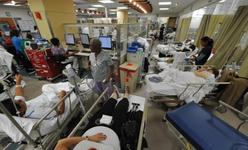 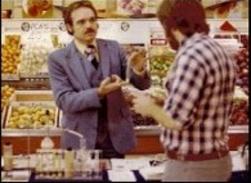 Dumping chemical on a country road! 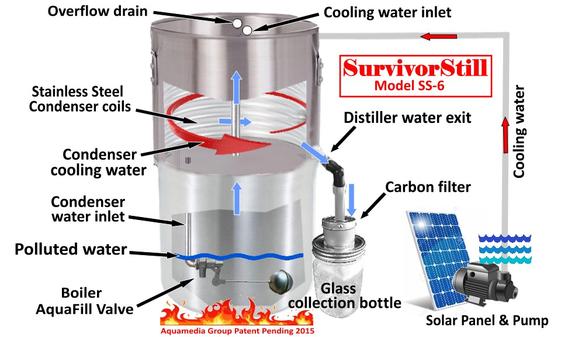 Price and performance of The Top 8 Water Distillers

The Home of the first bottled water

Comparison of The Two Top-rated 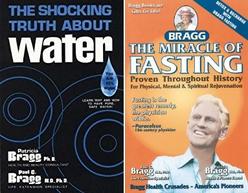 The Survival Still is not only top-heavy, it easily holds 40-50 pounds of potentially scalding water that can cause 3rd degree burns with as little as 2 seconds of skin contact. (Only needs to be 150 F., not 212 F at boiling!)

The top pot is precariously perched on top of the slippery stainless steel steam-diverter which is insecurely placed atop the boiling bottom pot. This steam-diverter device is advertised as a "distiller" for disasters and emergencies. First of all, you need to have the precisely sized pots for this stainless steel donut to work.

Two bulky pots and the steam diverter are not exactly handy to "bug-out" with in a hurry. The SurvivorStill is housed in a heavy-duty 7-gallon bucket with a screw-0n Gamma lid with handle for easy carrying. All of the components easily fit in the bucket with the SurvivorStill. The two big red crosses in the white buck make it easy to find or spot in a hurry in a cluttered garage or store room.

Plus, a disaster is a very inconvenient time for a friend or family member to get a serious 3rd-degree scald burn since a hospital might not be accessible for many reasons. Distance from a facility or possibly stalled cars, or grid-locked traffic could be a major threat. More than likely, over crowding or out of service, resulting from riots, gangs and looters could be an additional reason. Second or third degree burns when untreated could easily become infected or even septic which is always life threatening when not immediately treated.

Since water is second next to air in importance to our survival, the method for treating polluted water should not have the potential of becoming a hazard or threat to our health or existence. We will all have our own share of problems and challenges to contend with in a disaster or emergency.

Paul Bragg was in his eighties and in perfect health when he was seriously injured in a surfing accident in Hawaii and 6 months later died from complications. 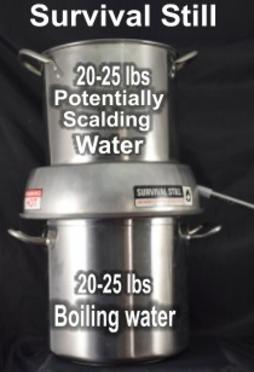 I'm testing a water sample from a

Gridlocked highways in a major disaster 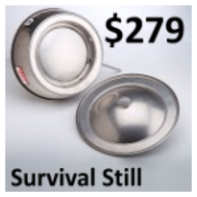 My name is Douglas Hoover, the inventor, designer, patent holder and manufacturer of the SurvivorStill SS-6, a non-electric water distiller designed for emergencies and disaster survival.

In 1975, I learned of the health benefits of drinking distilled water and fasting from reading Dr. Paul Braggs books, "The Shocking Truth About Water" and "The Miracle of Fasting." After reading these books, I started drinking distilled water and fasted for 19-days. By the end of the fast, my severe case of gout vanished and as a bonus lost 50 pounds and rid my body of nicotine and many other toxins that built up over the years.

Consequently, I lost the desire to smoke and additionally discovered I was no longer susceptible to colds, sore throats or the flu. I  continued fasting every year since for 21 days and every four years for 40-days. As a result, I have never been sick, been to a doctor or taken any medication for as much as an aspirin for a headache.

In 1975 I became a distributor for the Durastill water distiller company in Kansas City. Sharing the news about distilled water and fasting led to warning people about the chemicals showing up in Michigan's ground water.

It was discovered that the Detroit automobile industry was trucking their toxic chemical waste material into the countryside, pumping it into ditches along the road and even while driving down a road, streams, rivers and vacant farm land. It wasn't long before these cancer causing substances were showing up in local wells and water supplies. This was quickly becoming a national crisis with entire communities discovering their homes were built on top of toxic waste dumps.

I shared everything I had discovered from my research with a friend John Messimer, who had inherited an IGA grocery store from his dad Bill. After discussing the local situation in the community John was more than willing to have me set up a water testing lab in his store and began testing samples of water from the local wells. Every sample showed serious signs of contamination from nitrates, pesticides, and herbicides to industrial chemicals and heavy metals and even DDT.

As a result of the growing outcry, I installed a commercial 42 gals/ day water distiller in his store and fabricated a stainless steel filling station for 5-gal and 1-gal jugs. Within 30-days we had to install a second machine and by the end of the year, water sales were 2,500 per week. This was the only grocery store in America selling drinking water. Eight years later Glacier Water installed their first bottled water vending machine in 1983. By then we had machines in Krogers, IGAs, Safeway, Great Earth Vitamins in Michigan, Utah, and California.

I need to warn you about this product I purchased 4 years ago from the inventor. I bought this so-called distiller for approximately $279 which was advertised as being a non-electric distiller designed to distilpolluted water for drinking in a disaster or emergency. At the time, I had a fairly good idea how distilled water is produced from being around a shipboard distillation plant in the Navy. Simply put, polluted (ocean) water is boiled and turned to steam; then the steam is condensed back to water in the condenser with the salts and pollutants left behind in the boiler. Ocean water has 35,000 parts per million of dissolved solids and the distiller reduces it to zero PPM or just plain water, H2O + nothing.

When I received the Survival Still, the first thing I saw was a 12” x 3” stainless steel “Donut” shaped object. How could this possibly be called a distiller? There is no boiler or condenser. Upon further examination, it was clear that it was simply steam diverter and condensate collector and the directions said I needed to buy two specifically sized stainless steel pots.

Well, $300 later I was filling one pot with tap water placing the “Donut” on top of it, and filling the second pot and precariously perching it on top of the polished, slippery “Donut” surface. Talk about a serious injury waiting to happen! That thought was magnified after this unstable, 50-pound tower was placed on the gas burner stove and the water began rapidly boiling.

By the time distillate began dripping from the “Donut's” spout into the collection container, which I also had to provide, my fears of a potential scalding hazard were apparent. I do not have small children, yet I was still very concerned for my and my wife’s safety. Within just 20 minutes the temperature of the water in the top pot was at 150 F. and the amount of steam had increased; however, the amount of distillate had decreased proportionately.

I immediately realized the need to continually dump this 25-pound condenser pot and replace it with cool water from the tap regularly. What a waste of water and a major project and hassle! I had to go to the store and buy oven mitts to handle the pots. Plus, I had to watch it closely because the condenser could quickly reach scalding temperatures near boiling. Even 150 F. can cause severe 3rd-degree scald burns with only 2 seconds of skin contact.

To even get close to the advertised claim “12 gals per day,” I needed to change the water when it reached 135-140F or roughly every 20 minutes. The SurvivorStill adds cool water to the condenser continuously and automatically adds water as needed to the boiler. Plus the condenser stays at the ambient temperature.

Realizing how unstable both the condenser pot and the boiling pot are and how easily they could be pulled over easily or knocked over accidentally, I did not want to use it or sell it to an unaware victim. I cannot believe the inventor can knowing take donations from people for the purpose of giving this to poor people with children in developing countries.

I read the reviews on Amazon for this “Donut and pots thing” and was not surprised that it received only 3.5 stars. Some were suggesting that rather than continually lifting the 25-pound condenser pot of scalding water, to dump and refill with cool tap water to just add ice cubes or block ice to cool it down and produce more distillate.

Really? During an emergency or disaster, Ice? Why don’t you forget the “Donut” distiller and just melt the ice and drink the water? I finally trashed this so-called distiller since I couldn't in good conscience sell it on eBay to some unsuspecting buyer.

Do you now see why I could not be a distributor and instead set out to discover a scald-free non-electric water distiller. Shortly after making that decision and commitment, God downloaded the entire engineering plans into my brain one morning at 5-AM. I spent that day putting the SurvivorStill together and then drove to the ocean in LaJolla CA to get ocean water for my test.

Ocean water tests out at about 35,000 PPM (parts per million) of dissolved solids. The results of my first test was an astounding 28 PPM! The answer to why it was not zero, came to me instantly like a lightning bolt, add 2 inches to the mysterious t shaped baffle-device. I did just that and the 2nd test results were at ZERO PPM! This website contains the rest of the story.

As horrible as these photos are, they are not here as a scare tactic to sell SurvivorStills, nor to malign the inventor and manufacturer of the Survival Still. These are simply to illustrate the potential that the Survival Still has for causing such horrid unthinkable injuries to unsuspecting adults and especially children.

The SurvivorStll boiler is secured to the condenser with two heavy-duty, industrial-grade stainless steel snap latches, making boiling tank water spills impossible. Unlike all the other non-electric distillers, the SurvivorStill water stays at ambient temperature as is the temperature of the distilled water exiting from the condenser. 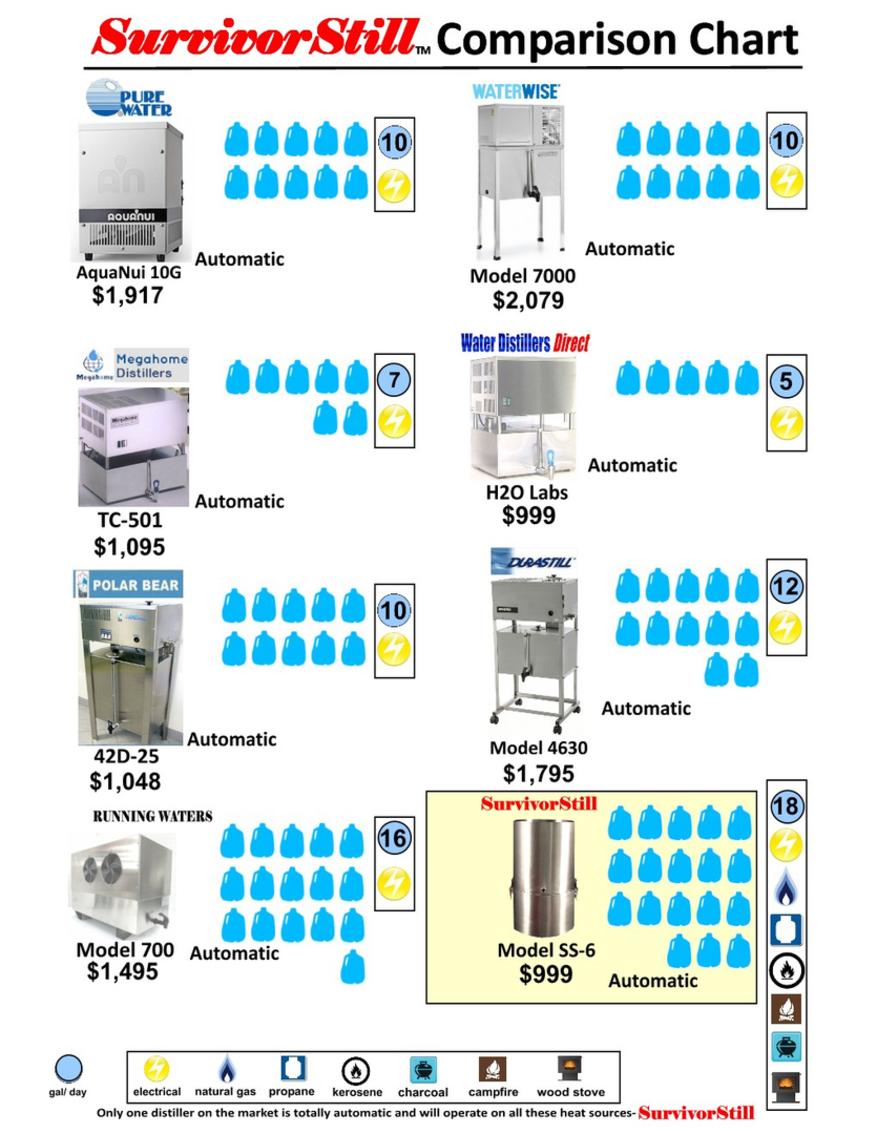 The customer needs to provide

two pots and they cannot be

aluminum or the distilled water

will leach aluminum from the pot.